When last we left, Lauren had proposed some interesting questions as to what we were going to do on our last full day of this year’s baseball odyssey. She was curious as to where the Cubs were playing and I told her they would be in Cincinnati on Monday night. She thought about it for a moment and resignedly told me that she had been considering either renting a car and driving or even taking a flight in, but since it was a night game, the timing would be difficult to get us back and packed to depart early on Tuesday.

I next decided to see if the Brewers were at home, but sadly, they were not, so Miller Park was out of the running for us. Flash back to Christmas a few years ago when Lauren got me a Fort Wayne TinCaps cap. I enjoy collecting interesting minor league hats and we had a friend who grew up in Fort Wayne and it became a bit of a joke to us. I mentioned, jokingly, that we should go catch a TinCaps game. Lauren asked how far it was to drive. It was about 3 hours each way and that sealed it. We were going to Indiana. 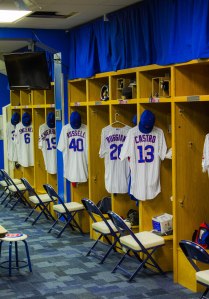 Our trip to the heartland wasn’t first on our agenda, though. First we were touring Wrigley Field. The tours are always advertised during Cubs games and, of course, I knew that we would have to do it when we were visiting Wrigley. Our guide was great. Very knowledgable and enthusiastic, he would not have been out of place working at Disneyland. I even learned a few fun stories about the ballpark’s history. I think Lauren and I were starting to bother the “guest wrangler,” who accompanied our tour to ensure that no one got left behind, because we were constantly stopping to take pictures and compose nice shots and adjust our settings. We got to see the broadcast booth, sit in the press box, visit both the home and away clubhouses and sit in the dugout. And then…and then I got to do the thing that I have wanted to do since I was 9 years old and I stood on the field. I stood on the same field as Ryne Sandberg, Ron Santo, Ernie Banks and Greg Maddux. It was so very surreal.

Following the tour, we did a lap around the stadium, in order to get pictures of all of the statues that reside around Wrigley. There are currently only 4, but I hope that there will be many more added in the coming years. The Cubs have a long history of which to be proud (No 1908 jokes!) and players that deserve to be honored.

Once we finished the tour, it was off to Indiana!

I’m sure that many people spend the final days of their vacations in a city as multi-faceted and interesting as Chicago by driving 3 hours into Indiana to watch a Class-A minor league baseball game, right? It’s totally rational.

If this surprises any readers in the slightest, you clearly don’t know Lauren or I. We booked a car as soon as we returned to the hotel to be picked up the following morning and returned on Tuesday at the airport. Now we no longer needed to lug our belongings through Wrigleyville to the El station. Two birds, one stone, you know. 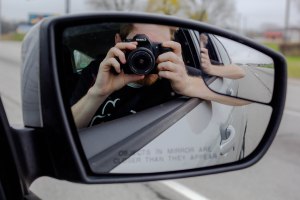 We picked up the car and were on our way. It was nice taking Lake Shore Drive out of the city and seeing many of the landmarks that we had seen on foot days earlier. Right outside the city, we stopped at a WalMart for some snacks and other necessities, and it was here that I got my first bit of anti-Cubs harassment. While neither the TinCaps, nor the Great Lakes Loons were affiliated with the Cubs, I was wearing my heavy Cubs jacket, since it was rainy and cold. As we were walking into the store, a man stopped his car right in front of us to yell “The Cubs suck!” and cackle as he drove off. This was an old man, mind you.

The rest of the drive was fairly non-eventful, though we did amuse ourselves by looking at the fast food restaurants in the Midwest that aren’t available on the West Coast. We are real connisseurs of culture. That being said, I will recreate our drive through Indiana.

We did that for 3 hours.

There was a bit of excitement when we were about an hour or so outside of Fort Wayne. We looked at the car clock and it was only 30 minutes until game time. We were absolutely gutted that we had made such an effort to get there and would still miss part of the game. Gutted until I realized that Indiana didn’t adhere to the status quo that is “daylight savings time,” and we still had plenty of time to reach Parkview Field.

The weather wasn’t looking terrific as we approached the stadium and I was silently praying that we didn’t make this trip to see half an inning of baseball and a rainout. I was reassured by some of the fine Indianans that it would take a flood of Biblical proportions for the game to be rained out, so we purchased our tickets with confidence. $8 got us seats in the front row right next to the TinCaps bullpen, where we saw Padres 2013 3rd round draft pick, Bryan Verbitsky warm up for his first start.

The weather was frigid, and while there was very little in the way of actual rain, the cold kept people away and honestly, there were probably less than 200 fans in attendance. I’m not complaining, it was kind of fun and made me feel like I had the run of the ballpark, which, by the way, was quite nice. 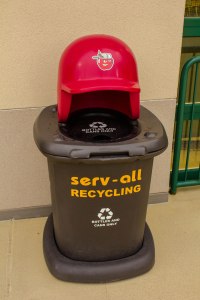 Obviously being a Class-A park, it is going to be intimate, which is something that I really like, and the TinCaps certainly embrace their connection to Johnny Appleseed with apple-themed everything, which made for some wonderful in-game food offerings.

We had the apple crisp and the apple wontons and both were outstanding. Warm and apply and the crisp even came in a mini-TinCaps batting helmet! What more could a guy ask for??

The team store, called The Orchard, even had a fake apple tree standing right in the middle of the store. What a store it was, too. It had significantly more merchandise and better quality than many MLB team stores that I have visited, putting the White Sox store we had seen the day prior to shame. We both ended up getting t-shirts to represent the most eclectic part of our trip. 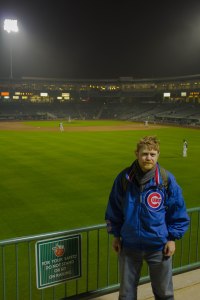 After our apple snacks and shopping we walked around the whole park and took in all of the little details, including the treetop seating area and the large expansive lawn beyond the outfield fences. What little rain there was had decided to appear at this point and even the most hardy of fans were leaving. Not us, though. We wanted to get our full $8 worth! We even found Johnny TinCap and got our photos with him.

Also during our wanderings we wound up talking to an usher about our trip and how we managed to be so far from both our temporary home in Chicago and our real home in California. He asked us if we would be attending the game on Tuesday, and we had to tell him that we were just in town for one game. He seemed disappointed, but I reassured him that the ballpark and the team were leaving us with a very favorable opinion.

As far as the game was concerned, well, things weren’t pretty. The TinCaps ended up losing 7-3 and sitting as close to the action as we were, we could hear the frustration of the TinCap hitters returning to the bench. Quite a bit of salty language was being thrown around.

The inevitable happened. The TinCaps took the loss and we left Parkview Field, for quite possibly our one and only visit. 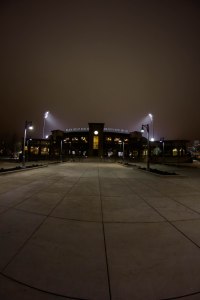 The field is quite nice and well taken care of. The staff were all in very good spirits and seemed to value the fan experience, which we appreciated. The food was great and I only regret that I had but one stomach in which to fill with apple-based goodies. The entire experience was wonderful and it speaks highly of the Padres organization in general that both low minor league teams that I have visited within their organization (the Lake Elsinore Storm) have been such positive fan experiences.

The drive back to Chicago seemed much faster and we stopped to have our first White Castle burgers at a gas station/White Castle restaurant somewhere in rural Indiana, where the employees were shocked that we didn’t have them our west. The burgers were everything that we hoped for and more. We got to the hotel at around 1am and proceeded to get ready to depart the following day.

Up next, the recap.

Until next time, keep trippin’ baseballs!