Ernie Banks was one of the best of us. Despite being a Hall of Fame baseball player who was denied any sort of post-season activity by virtue of being a life-long Cub, he never showed any resentment. He never asked “Why not me?” as vastly less talented players got to taste the World Series and, later, playoffs. He always seemed happy to be alive, and the fact that he is no longer so is a terrible thing for the Cubs, baseball and the world at large.

The quote most associated with Banks is “It’s a beautiful day, let’s play two!” But according to Banks, the line had a bit more to it than people assume. Speaking to Richard Dean of the Houston Chronicle, Banks recalled,

“”It was about 105 degrees in Chicago, and that’s a time when everybody gets tired. I came into the clubhouse and everybody was sitting around and I said, ‘Beautiful day. Let’s play two!’ And everybody looked at me like I was crazy. There were a couple of writers around and they wrote that and it stayed with me.”

That was Banks in a nutshell. As an All-Star and future Hall of Famer, Banks could have sat in the clubhouse and sulked about having to play in the middle of the day in the heat of summer, but he didn’t, and that is what will be most closely associated with him, his sunny outlook on life.

Even once he retired, he was the face of the Cubs and remained so until his death. As blog readers will recall, I attended the 100th Anniversary of Wrigley Field and Banks was in attendance, and seemed to be in great health and, naturally, great spirits. He walked on the field with no assistive devices, visiting with teammates and old friends, looking more spry than some of the alumni years younger.

My personal recollection of Mr. Banks was at my very first Cubs Convention when I was 14. The Convention was less hectic than it is now, and you didn’t need to hit the lottery to meet with any of the players or celebrities. Naturally, Mr Banks was one of the more popular autographs to obtain, so I hopped in with the mob, hoping to get him to sign my baseball. My mom attended the convention with me and was pressed into duty as my personal photographer.

As she was positioning herself to get a good shot of Mr Banks and me, he looked up at her and said “Young lady, is your boy in this line?” My mother affirmed and all of a sudden he called for me. “Where’s your boy? Where’s your boy? You get him up here to me!” 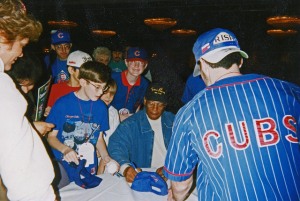 I felt like I floated through the line and I shook his hand and he signed the one single-signed baseball I got that entire weekend. As you can see, almost 20 years later and I still tell the story of the time that Ernie Banks “hit on my mom.” It’s just a shame that I’ll never get to tell him the tale.

Goodbye, Mr Cub. I never saw you play in person, but I’ve seen the old tapes. Heck, I even made myself listen to Jack Brickhouse calling home run #500 tonight. I kept it together a little bit better than I did when I had heard you passed away, as I was sitting at the In ‘N Out burger tonight.

I know Harry and Ronnie were just waiting for you to get there, and I know that heaven looks a lot like Wrigley Field–in fact, I’d even swear there’s a little bit of ivy covering up those pearly gates tonight.

I’m sorry you never got to be a part of that World Series win at Wrigley, but don’t you worry. We aren’t going to forget you when the time comes. Keep smiling and remember, the sun is always shining up there and it’s always a doubleheader.

I miss you already.