I wasn’t intending to attend my first baseball game until the 22nd of this month, to see the Angels take on the Rangers, but I got a call from my brother on Monday night offering me an extra ticket to the Padres home opener. After moving a few things around, I was able to take him up on his offer.

My fiancee, Lauren drove me from Orange County down to San Diego, picking up my brother from work as well, and dropping us  at the ballpark. My parents were also attending the game so we had a ride after the game, and Lauren wouldn’t get stuck downtown while we watched the game.

We arrived shortly before the Opening Day festivities and found our way to our seats in the Toyota Terrace. Matt had gotten the tickets from a mutual friend and I hope to use the tickets again this season, sooner rather than later. Our section even had runners who would take your food order and deliver the order back to you so there was never a need to leave your seat. Fancy stuff!
This year the Padres are celebrating their 1998 run to the World Series (just as long as we don’t bring up the Padres OTHER World Series) and I was a regular attendee during that season. One of my favorite players from that team was slugger, Greg Vaughn, so I was thrilled to see him throw out the first pitch to the catcher from the 1998 team, Carlos Hernandez. 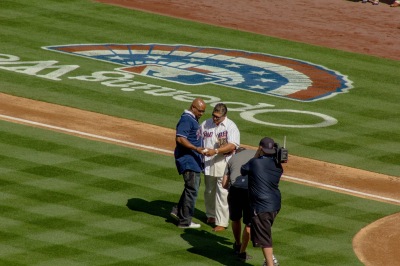 The Padres also do something cool as they introduce the team. As the starting lineup is introduced, they come down from the stands and down a temporary staircase onto the field. I understand that they have been doing this for the past few years and it’s a really unique way to start the year. I’m a big fan of anything that gets the fans in a closer proximity to the activity, particularly with all of the pomp and circumstance of Opening Day.

The Padres also happen to be the official team of the US military and so, of course, there was some military presence at the game. A large group of Marines was welcomed pre-game and prior to the National Anthem, the midshipmen from 2 locally based carriers unfurled a huge United States flag. The Padres also invite the fans to sing along with the Anthem, which is uncommon, but a welcome touch.

The game pitted Clayton Richard against Josh Beckett. Neither pitcher looked particularly great in the early goings, but Richard made the big pitches when he needed to and got some lucky ground balls, while Beckett got touched up a bit, including giving up a home run to Will Venable. I actually was telling my brother that I liked Venable, but that he has yet to capitalize on his tools, when he launched his no doubt home run.

The game would essentially see-saw back and fourth until the bottom of the eighth inning when the wheels came off for the Dodgers and they saw five runs score. The game was essentially over at that point and Luke Gregerson was able to pick up a win by throwing a single pitch.

It was a great game, close for most of it, but ending up with a big win for the home team on Opening Day, which is always a big plus. In addition, I got the chance to see my new favorite Padre, Jedd Gyorko and Andrew Cashner, a favorite from his Cub days, both of whom did well.

It was a great way to kick off the 2013 season, and hopefully my other ballpark endeavors will be as exciting and satisfying! I’ve already decided that even outside of the Cubs series, I want to try to get to more games at Petco and maybe try to meet Jerry Coleman, one of the main baseball voices of my youth, and have him sign a baseball for me.
I can’t wait.